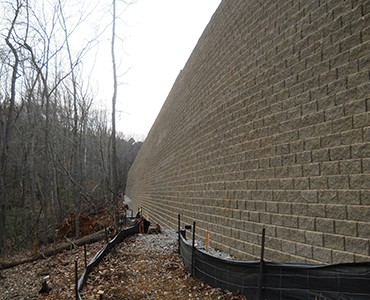 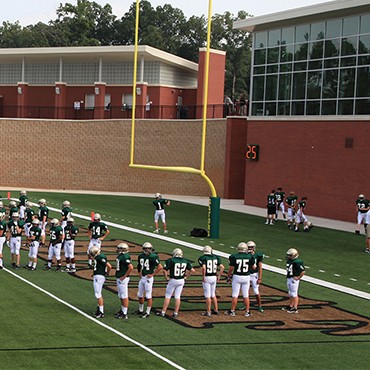 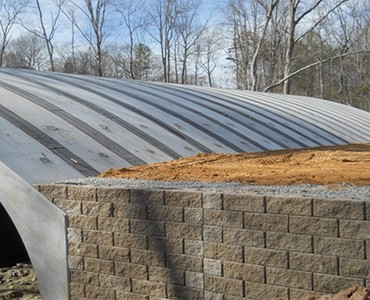 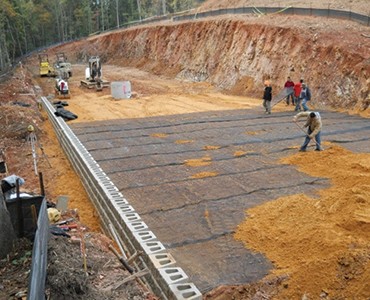 ​The Lexington School District One in South Carolina secured 150 acres of densely wooded land with wetlands, a highly variable topography and a ravine to build a 524,000 square foot high school building, parking lots and athletic facilities. The size and location of the site were ideal but the extreme conditions required extensive development to make it a suitable building site.

A ravine in the middle divided the site into two areas. The east side was developed for the school building. The athletic fields and complex were built on the west side. One of the first walls built was a 48-foot-tall (30,000 sq. ft.) Diamond Pro Stone Cut® retaining wall designed to support the school’s main parking lot, which would be used as a staging area for materials needed to build the school. Another 100,000 square feet of retaining walls averaging twenty feet tall circle the campus (and also include walls designed to construct the land bridges to connect the campus).

The grade variations required moving more than one million cubic yards of dirt to level the site. Most of the onsite soils weren’t suitable for retaining wall construction and 60,000 cubic yards of sand were hauled to the site to backfill the walls, a critical part of the design to insure long-term stability. To minimize the high cost of importing select sand, ANCHOR Engineering prepared a design to incorporate some of the suitable on-site soil into the upper heights of the retaining walls.

The key to transforming the site to make it construction-ready was building 24 retaining walls totaling 130,000 square feet. “The River Bluff High School project could not have happened without the retaining walls,” said Dallas Gailey, construction manager with Cumming Corp. “The site was unusable without the extensive site work.” Added Kevin Krick, the design engineer with Genesis Consulting Group, “It was important to choose the right retaining wall. The Anchor systems were chosen for aesthetics and Anchor’s ability to assist in structural design. Because of the size of the walls, we wanted an experienced team that would stand behind the product and design.”

Aesthetics a Priority
The aesthetics of the campus were very important and the district even sought design input from the community. The three-level campus, which sits on a wooded hillside overlooking the lower Saluda River, is a source of community pride and is open to the community for hiking. “The retaining walls went hand-in-hand with the design,” said Gailey. “They provide a beautiful look to the overall project.”

The school district had the Diamond Pro Stone Cut® system installed on two other school sites before it was chosen for the River Bluffs project. The natural-looking face texture, colors and overall appearance of the system beat the look of uniform gray blocks typically found on massive retaining walls.

The football field prominently features Diamond Pro Stone Cut walls that support a raised pedestrian plaza and entrance to the arena. On the field, the highly visible walls flank the end zone and blend nicely with the materials used throughout the facility.

Product Solutions
The Diamond Pro Stone Cut system was ideal for a majority of the project but the Vertica Stone Cut® system was used to build three land bridges spanning the ravines.

The functional bridges also support the overall design of the campus because the Vertica Stone Cut system has the same face dimensions, texture and color of the Diamond Pro Stone Cut system, so the systems blend nicely together.

​A large, challenging site was transformed with retaining walls to prepare it for construction. Following completion of the River Bluff High School campus, the retaining walls support the aesthetic design as well as the critical roadway and pedestrian structures. “Visitors comment on how well the walls blend with the architecture and natural surroundings,” said Jeff Salters, chief operations officer for Lexington School District One. “The walls enhance the overall campus and support the natural look we tried to preserve on the site.”