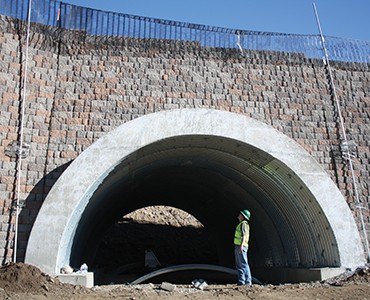 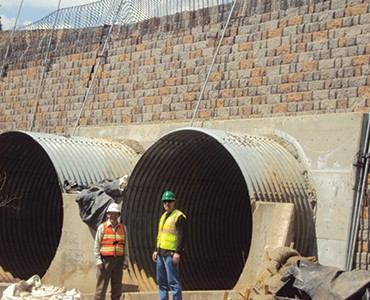 U.S. Highway 285 is a main route for Denver and mountain-area commuters. At an intersection known as Shaffer’s Crossing southwest of Conifer, Colo., more than 17,000 vehicles pass daily through a signal-free intersection. The ever-increasing volume of traffic was a safety concern, and the Colorado Department of Transportation (CDOT) needed to upgrade the intersection with a new interchange.

The site called for massive retaining walls, and the CDOT required the segmental retaining wall systems to pass 150 freeze-thaw cycles and test at a minimum of 4,500 psi compressive strength. The chosen system also would be evaluated for aesthetics and colors that blend with the surroundings. Other project challenges included the short Colorado building season and the need for a bridge design that facilitates wildlife crossing.

Using funds from the American Recovery and Reinvestment Act (ARRA), the Colorado DOT built a new interchange with a massive embankment, supported by a concrete segmental retaining wall, to elevate the highway and improve traffic flow and safety. The product used is the Diamond Pro Stone Cut® retaining wall system, which has been used by CDOT on past projects and met the product testing requirements for the Shaffer’s Crossing project.

Sean Chiang, the principal engineer with Ground Engineering Consultants in Denver, designed the 65,000-square foot segmental retaining wall and embankment that support the roadway. Design considerations included for the installation to occur at the bottom of a slope and above a creek. Wall heights reach 53 feet. Chiang also incorporated many features that were predesigned by CDOT engineers to account for environmental conditions, including two large culverts to handle spring flooding and a wildlife passage integrated into the wall for the area’s elk and deer.

To meet CDOT’s strict aesthetic specifications, a local company manufactured two color blends: antique pewter and tan brown. The 8-inch-tall blocks in 7-, 11- and 18-inch widths and the two colors were installed randomly to blend in with the surroundings and complement the area’s rock outcroppings.

The installation required precise timing, planning and execution on the part of Bryan Miller Company of Denver. One was staging work on such a large wall while being aware of the short construction season (crews are always mindful of the notorious Rocky Mountains snowfalls). The crew also worked under the scrutinizing eyes of state and federal inspectors who made frequent and sometimes duplicate checks on construction and material tolerances. Building the wall to accommodate wildlife passage was exacting work, too, as crews worked to keep the courses of block level while working in a serpentine path around the huge, 20-foot-wide structure.

Bryan Miller, president of his company, provided significant value with creative ideas to keep the project on schedule and on budget. For example, he recommended changing the backfill from granular soil to crushed-rock backfill. That allowed the 80,505 cubic yards of necessary material to be crushed and screened on-site rather than hauled in from an off-site pit. Crushed rock was plentiful as the DOT was conducting mountainside blasting operations to widen Highway 285. The crushed-rock backfill compacts well in cold weather and also reduces the potential for settlement in the wall, which is a critical consideration when building tall walls. The recommendation was approved by Sean Chiang and Martin Herbaugh, the Civil Engineering Project Manager II for CDOT, and construction continued into the winter.

The Colorado DOT actively specifies segmental retaining wall systems for road construction projects because of performance, cost efficiency and aesthetics. The Diamond Pro Stone Cut® system has been used by CDOT in other projects, including a large, 28,000-square foot CDOT wall on U.S. Highway 40 in Golden, Colo.

Panel wall systems are common for transportation projects, but segmental retaining wall systems (commonly referred to as SRW systems) are increasingly accepted. According to Chiang and Herbaugh, there are high-quality systems that meet criteria for freeze-thaw and compressive strength and, when combined with quality engineering design, geosynthetic reinforcement and competent installation, SRW systems are an excellent choice for highway projects.