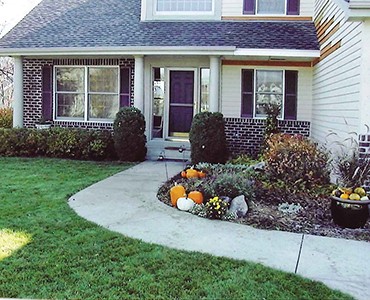 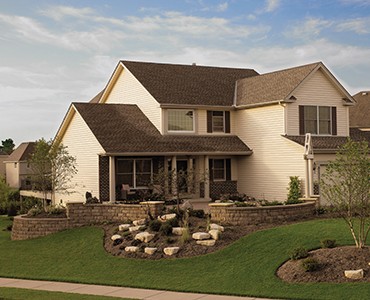 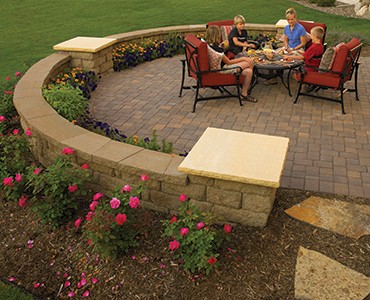 ​Originally, this home in Eden Prairie, Minnesota, had a yard much like many others in the suburbs. Set on a large corner lot, the home’s only landscaping in the front yard was a small, nondescript cement walkway to the front door, with a small planter, dying crab trees and some shrubbery. The backyard, visible from the street, featured a small terrace built of concrete blocks, and a traditional wooden deck. Most of the yard was composed of undeveloped grass, and the landscape wasn’t really maximizing the outdoor space.

The homeowners wanted a new landscape that would make better use of the large yard, provide patio space for cooking and entertaining and give their home some needed curb appeal.

​Craig Frick, of Superior Lawn and Landscape in St. Bonifacius, Minnesota, took on the challenge of creating a new landscape. Frick designed a wrap-around front courtyard, with a terrace leading to a patio in the back, all created using the Highland Stone® wall system. Incorporated into his design were a water feature, natural rock gardens, an arbor, and several new trees and plantings to provide visual separation from the street.

Much of the front courtyard consists of a paver patio and a walkway, flanked by rock gardens and flowers. The water feature, which feeds a stream and koi pond, provides noise screening for the courtyard. Surrounding the courtyard are short walls built using the Highland Stone freestanding wall system, which give the project a more polished, contained appearance, while doubling as extra seating.

In the backyard, Frick created a paver patio at the base of the stairs below the elevated wooden deck using the Highland Stone freestanding wall to border the patio.

Frick chose Highland Stone products because of their textured, rich appearance and easy installation. The blocks’ multiple sizes and natural appearance blended well with both the house’s design and the rest of the neighborhood.

​Overall, both Frick and the homeowners were very pleased with the outcome of the project, particularly because it is so highly visible from the street. The warm look of the Highland Stone wall system, combined with the inviting patio space, have given the yard an entirely new and welcoming atmosphere. According to Frick, the new landscape has “really raised the bar in the neighborhood, and he is proud of how the project has turned out.