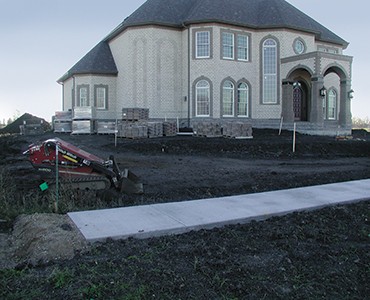 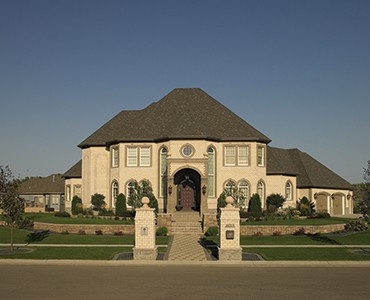 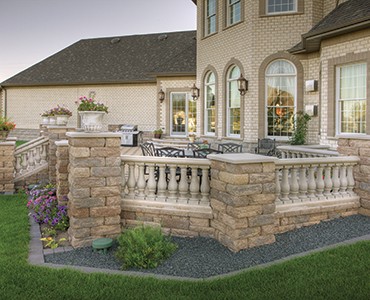 ​How do you create a landscape plan fit for a house that’s inspired by the famous Château de Versailles in France but is built in Fargo, North Dakota? That was the challenge presented by a homeowner and aficionado of all things French and the 17th-century era of Louis XIV. The home is inspired by the famed château and the landscaping was no afterthought because the actual French gardens, which took nearly 40 years to construct, are considered as important as the château.

Like Louis XIV who consulted the experts of his day, the homeowner worked with one of the area’s leading hardscape designers and installers, Hebron Brick and Block of Fargo. Ryan Hoss of Baker Garden and Gifts recommended Rich Lahren, the landscape division manager at Hebron, for the job. Hoss is a landscape designer who developed the landscape plan. Lahren brought more than 20 years of hardscapes expertise to the job as well as a reputation for quality craftsmanship. Lahren is also known for being a knowledgeable contractor who researched and built Cape Cod and Southern-inspired landscapes in eastern North Dakota and western Minnesota.

​The project features the Highland Stone® 6"/3" retaining wall system, concrete pavers in a checkerboard pattern to match an interior granite floor and limestone accents in the front and rear of the home.

As Lahren reviewed the plans, he spent hours listening to the homeowner and his knowledge of French architecture (“I like to pick their brains,” notes Lahren of his customers) and conducting his own research before making product recommendations. The time paid off well, as Lahren sourced the Highland Stone products in a color complementary to the home that’s not normally available in his market (it was shipped from South Dakota) and recommended limestone balusters and one-of-a-kind limestone steps.

The backyard features a spacious raised patio, which the homeowner refers to as a courtyard. Lahren and his crew employed their meticulous craftsmanship as they installed the limestone railings and each of the 110 balusters. Lahren likes to think that every job requires a new skill. For the courtyard, the crew used a Dremel tool outfitted with a diamond tip to cut into the Highland Stone column units for perfect integration with the horizontal railings. Each baluster was drilled to hold a fiberglass dowel and glued in the bottom railing, which is mortared into the Highland Stone cap and outfitted with a plastic masonry weep vent for drainage. While the time-consuming work on the patio details alone took two weeks, and was costly, the installation is picture perfect.

​Visitors to this unique home are greeted by a landscape that not only complements the French-style home but that equals its authenticity and impact. The retaining wall and paver colors complement the home and are inspired by pictures Lahren found during his research. The multiheight Highland Stone retaining wall complements the home’s architecture, and the checkerboard pattern on the paver walkway was recommended by the interior designers working inside the home. Although the address may be Fargo, North Dakota, the sign cleverly installed in the front entrance accurately sums up that this is a house (and a landscape) built for a king.