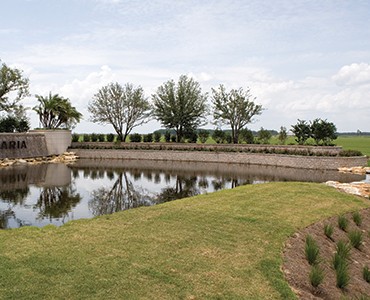 While best known as the founder of Domino’s Pizza and the owner of the Detroit Tigers baseball franchise, Thomas S. Monaghan also had another vision: to create a Catholic town and university from the ground up. After years of hard work and preparation, Ave Maria, Florida, was created in 2003.

Located near Naples and Immokalee, Florida, Ave Maria was the largest construction zone in the United States at the time. Included in the development are homes, businesses, roadways and a full-scale university, complete with residence halls, administrative buildings and athletic facilities. Naples-based Outside Productions took on the challenge of creating construction plans for the approximately 106,000 square feet of retaining wall, including planter walls, land bridges and a large detention pond—something especially important in the damp Florida climate. Ave Maria was created on turf farms, tomato farms and citrus groves. Unique challenges included limited utilities, flat topography and constructing a new landscape at the same time as several new buildings.

The original conceptual sketches called for the planter walls to be poured-in-place concrete. However, at the time, concrete prices were soaring and Outside Productions sought out the Anchor™ Diamond Pro Stone Cut® wall system as an alternative. Outside Productions chose the product because of its appearance and affordability.

According to Rebecca Scheffler of Outside Productions, Diamond Pro Stone Cut blocks “would provide a cleanlined, light-colored wall that would be similar to pouredin- place concrete stucco. They were also incredibly easy to install.” A segmental retaining wall also had the added benefit of reduced maintenance.

The main hardscape feature of the development is the entrance sign and surrounding walls. This structure contains two 10-foot-high signs rising out of the detention pond, surrounded by large planter walls and an upper water feature.

The design also called for two connected water features. Water is pumped from a canal into the upper detention pond; if too much water flows into the pond, the water flows back into the canal. In order to maintain an even water level between pond and canal, the contractors had to construct a 24-inch pipe beneath a land bridge to channel the water. In addition to the upper water feature, the town’s main entrance sign sits in front of a treated-water pond that is similar to the look of an infinity-edge pool. This pond is surrounded by walls built with Diamond Pro Stone Cut product.

​Ave Maria has become a thriving town, and Ave Maria University now enrolls nearly 500 students on its newly completed campus. Outside Productions could not be more pleased with how their portion of the project turned out. According to Scheffler, “It’s a great project. We continue to be really proud of it!”